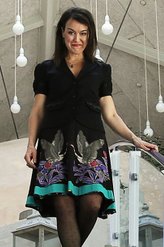 Half French and Swedish from birth, this artist/singer and earlier oboist came to Denmark in 1992 to pursue her education as an opera singer. Initially at the Royal Danish Conservatory of Music and then further on, at the Royal Danish Opera Academy.

During her years at the Royal Danish Opera Academy, she interpreted the roles of Nerone (L’Incoronazione di Poppea), Siebel (Faust), Mimí (Bohème), Desdemona (Rossini's Otello), Zerlina and in 2000 she was laureate at the international singing competition of Maria Canals, in Barcelona.

With her very flexible, colourful voice and sense for improvisation, Isabel Piganiol's repertoire stretches from early baroque music to contemporary modern music. Her dramatic strength has been used in various shows, such as “Fantomer”, at Statens Museum for Kunst=The State’s Museum of Art, Copenhagen… and in the summer of 2008 she gave the role Cherubino a new feminine and revolutionary character together with the Swedish instructor Leif Adolfsson, Ystad Opera, Sweden.

In 2009 she sang Anna in a new piece ( “De syv dyders hus”) by the danish composer, Torben Kjær, on various scenes in DK and on tour, also sang Dinah in Leonard Bernstein's beautiful “Trouble in Tahiti”.

Her interest in modern music has its roots in studying with, amongst others, contemporary Swiss composer Otto Graf, who also wrote music especially for her. Isabel Piganiol also interpreted the leading role in Danish composer Eva Noer Kondrup’s opera “Neja” at Den Anden Opera, Copenhagen.

In 2005 she sang the role as the Mother in the “Operaverkstan”-company’s (Malmö Opera, Sweden ) setting of “Kasper Rosenröd”.

In 2010 she sang Marguerite in Berlioz’s “La damnation de Faust” in Singapore, with Singapore symphony orchestra and the same year the role of Elvira in Operassion’s setting of “Don Giovanni” in Ludwigsburg, Germany.  In 2011 she sang and acted the main part in “Forår I København” by Sejer Andersen and composer Pierre Dørge. In 2012 she interpreted the role of Mercedes in “Angelo” by composer Lars Klit and toured with “Nordic Sopranos” and “Øresundsoperaen” in Scandinavia and Croatia.

In 2013 she sang Violetta in Nordic Opera's production of Verdi's “Traviata”, Sofie in a re-production of “Monster Opera” in Ishøj Teater and on tour in Jutland, 6 New-Years Eve concerts with Nordic Sopranos and Ålborg symphonic orchestra.

In 2014 she incarnated the title role in Puccini's “Tosca” at the Ålborg Opera Festival, Tora in Nordic Opera's production of a contemporary opera “The deepest spot in the North sea” by Daniel Hjort, on tour in Sweden and Denmark (also in Iceland and the Faroe Islands in 2015)

In autumn 2014 she sang the title role in “Tosca” again, this time produced by Teater Undergrunden.

Another strong character in a newly written opera by Hugi Gu∂mundsson, was bestowed to her in 2018: Gertrude, the queen mother in "Hamlet in Absentia".